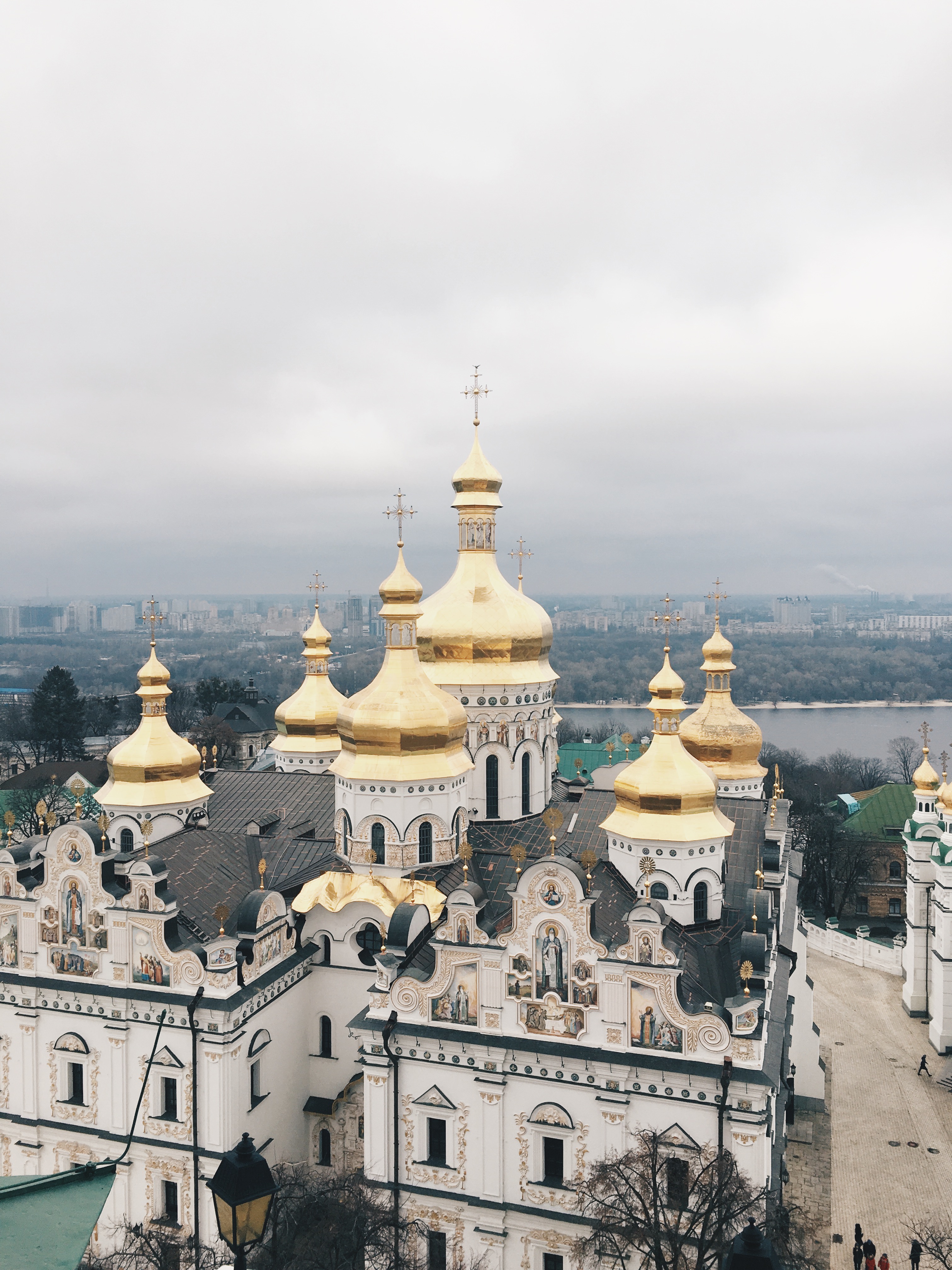 For the past few years, we’ve been celebrating New Years with friends in Vilnius but this year we wanted to fly somewhere. We decided to visit Ukraine’s capital Kiev and celebrate New Years there! This is what this post is about – our short but memorable trip to Kiev. We arrived at our hotel in the afternoon and shortly after unpacking we went to one of the best restaurants in Kiev – Musafir. Delicious Tatar food is served there and it’s better to have a table booked. Would I recommend this restaurant? Yes! The food there was great and I would love to go there again! Our friends were also really happy with the food, drinks and service so if you’ll be in Kiev make sure to visit this place!

After the dinner, we went to the Independence square. It wasn’t much to do there but it was a must go place since it’s one of the most politically important spots in Kiev. Later on, we went to the Christmas market right next to the St. Sophias Cathedral. There were a lot of stalls with mulled wine, handmade gifts and sweets but what I enjoyed most was the marvelous domes of St. Sophia’s Cathedral.

Our evening ended up at the quite small but cozy Alchemist bar with live music and superb cocktails. Locals say it’s one of the best bars in Kiev and it truly was great. The vibe, service and drinks were awesome but live jazz with a bit of rap was extraordinary!

On Sunday we went to visit Lavra, also known as Kiev Monastery of the Caves. Golden domes of cathedrals, significant architecture and interiors stole my heart. I was amazed by every building there but the best part was the panoramic view from the Great Lavra Belltower. We were lucky to get there right before closing so if you’ll be visiting this place, check the working hours and make sure to go there on time! The Cathedral of the Dormition was magnificent as well, full of golden details, icons and lovely candles. Though the Lavra is famous for its caves, we decided not to visit them because we were running out of time and wanted to go to the deepest metro station Arsenalna before dinner. Another great place for dinner in Kiev is a secret restaurant Last Barricade which is located in the Independence Square. It’s one of the most interesting restaurants I’ve ever been to! The Last Barricade is hidden in the shopping center Globus and you need to know the password to enter so if you’ll want to go there, book a table and ask where to find it. Traditional Ukrainian food is served there and everything we had was delicious. Most of all I enjoyed our desserts – the marshmallow with apples and pumpkin pie with smoked buffalo ricotta. The Last Barricade is a wonderful place to have dinner at so go there if you’ll have a chance.

To celebrate the New Years evening we chose Regenschirm. It’s all in one – a bar, restaurant and club. It was good but I’m not a nightlife person so I wasn’t mesmerized by it. However, I did enjoy the outfits of people there. Most of them were hipsters and I was amazed by the way they looked. Long sheer dresses, oversized hoodies, denim jackets and sneakers… Not the formal clothes I usually see at places like this one.

Even though we got home in the early morning after celebrating the New Year, we wanted to explore the city on the 1st of January. So we started our tour at the Motherland Monument which is even higher than the Statue of Liberty. At the same place, we also found an exhibition of military transport such as planes, ships and tanks. Then we drove to the city center where wanted to get up the hill with a funicular but there were so many people waiting and so cold outside that we decided to skip this attraction and went to have some snacks.

Lyubov-Morkov was the place which got our attention because of welcoming and nice looking interior and we were really happy about it. Plenty various mouthwatering sweet and sour waffles are served there. I chose the one with chocolate, bananas and ice cream and got a cup of warming orange, ginger and cinnamon tea. We spent there more time than planned but, oh boy, it was worth it! After having some waffles, we continued our tour and went to the Postal Square which was full of carousels and stalls with Christmas sweets. Then we went through the lovely street Andriyivskyy Uzviz which led to the enchanting St. Andrew’s Church. Later on, we went to see the St. Sophias Cathedral, the Golden Gate and St. Volodymyr’s Cathedral.

Our Monday night ended up at The Burger close to the place we lived at. We haven’t expected the burgers there to be good because it was a random place we chose but it exceeded our expectations. The burgers were the best ones we’ve ever eaten!

On Tuesday we planned to go the physics museum Experimentanium and then visit the places we skipped on Monday. We wanted to see the St. Nicolas Wondermaker on the Water Church, get up the hill with a  funicular, go to the St. Michaels’s Golden-Domed Monastery then have lunch and drive to the airport. Well, the plan didn’t work out. Instead of this, we had a wonderful brunch at the Milk Bar (I’ve eaten waffles with chocolate again, yay!) and went to the Experimentanium. Somehow, we spent the whole time we had at this place. It was wonderful! There were so many interactive gears and mechanisms that if we could, we would have spent the whole day there! After the Experimentanium, we headed straight to the airport and flew back home.

It was a short but wonderful trip to Kiev and I enjoyed every minute there. I hope this year will also be the same – with lots of adventures, happiness and joy.

Let’s Get Ready for the New Year!