The taste of Bologna 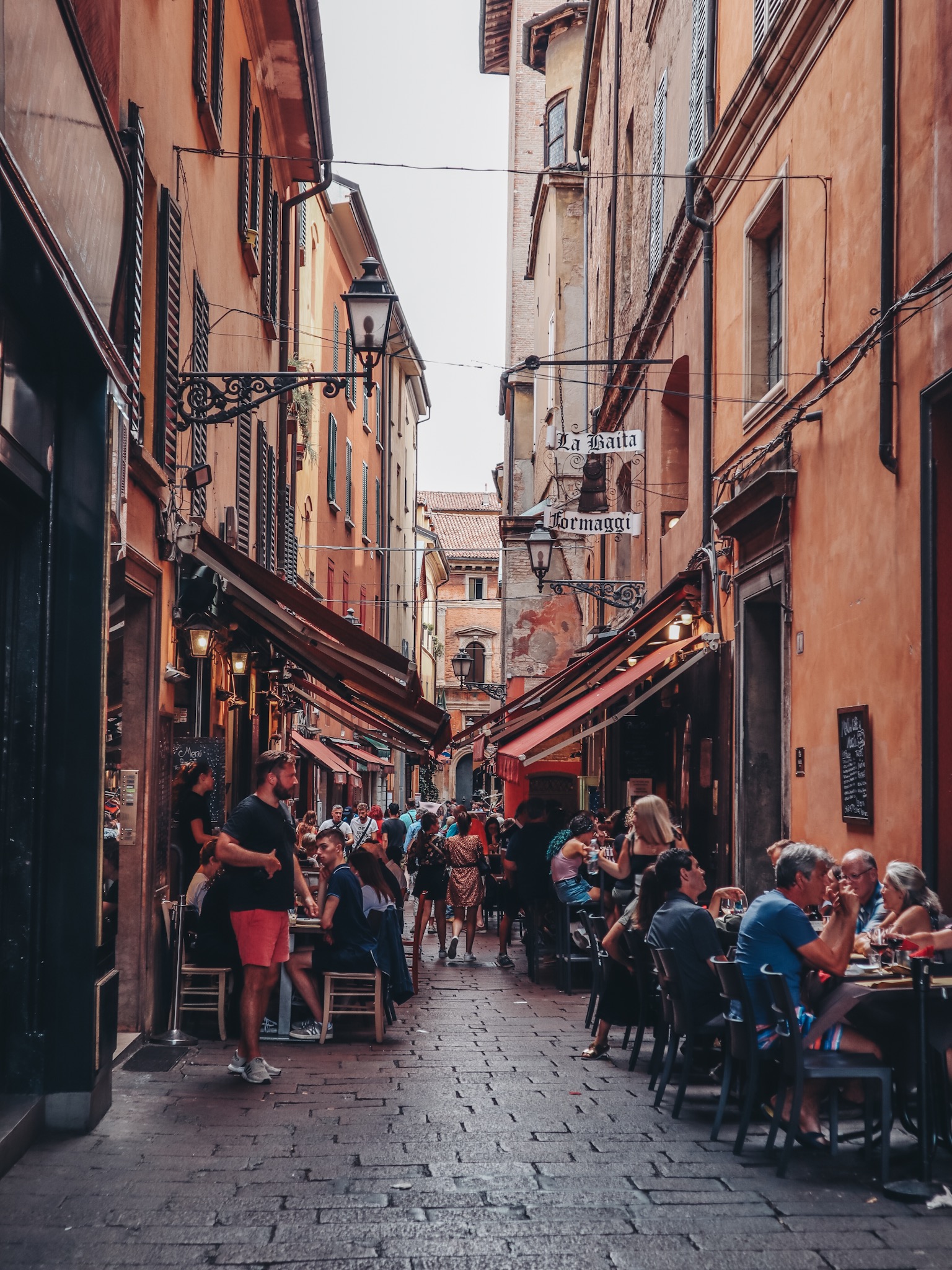 Some time ago, I shared the details of our trip to Florence and also wrote about train-tripping in Italy. Well, now it’s time to share our tasty experience in Bologna!

We came to Bologna by train from Florence, and it was our second destination in Italy.

There we chose to stay at B&B Hotel Carosello because it was in a convenient location for us (it was close to the city center and the train station), had very good ratings, including breakfast, as wasn’t expensive. That was all we looked for when choosing a hotel and we were more than happy with this decision.

Also, once we checked in, the hotel owner asked us if we’d like to hear his recommendations. Sure we wanted to hear them and it was an experience itself! We sat in the dining room by the round table and he was marking the most beautiful places such as churches and streets, also told us where to get the best pizza and what not to miss.

In Bologna we had one afternoon and one full day, it wasn’t much but we wanted to make the most of that time.

The first location we went to was a restaurant very close to the main square. 051 Piazza Maggiore. Pavelas’ sister recommended this place to us and we went there to taste the delicious hams and cheeses of Bologna. Together with wine, it was an extraordinary tasting experience.

For dinner, we tried pizza slices right next to Bologna’s main sight – the two towers. It was Pizzeria Due Torri where we got our two slices and ate them while sitting on a bench in the two towers square. If you’ll be looking for a quick dinner in Bolognas city center, find a better place than this one cause that pizza wasn’t good. Well, but in order to appreciate the good food, you need to get bad from time to time so it was also an experience (but seriously, Pizzeria Due Torri slices are not worth trying, there are many better spots out there).

What was very tasty in Bologna was the ice cream at Cremeria La Vecchia Stalla. Oh god, it was the best! As much as I didn’t recommend that pizza place, I do recommend this ice cream spot! During the ten-day journey, we haven’t found a better place than this one.

The next day, we had our breakfast at the hotel and then went for a coffee dessert hunt. We ended up at the Aroma cafeteria. From the outside, it didn’t look very welcoming but we trusted the ratings (according to Foursquare, it’s the 5th best cafeteria in Bologna). We tried coffee zabaione & flordilatte. They both were well-made espressos with… something extra. Nothing like we ever tried before! A bit strange but tasty. Actually, I consider such coffee desserts a must-try when in Italy.

We also went for lunch at one of the restaurants recommended by the hotel owner (to compensate for the bad pizza decision of the previous day). It was Il Veliero (il veliero). The pizzas were huge so we took one for both of us and it was more than enough. Well, and the taste was great! A well made Italian pizza!

The last restaurant we went to in Bologna was Osteria dell’Orsa. We wanted to try out traditional Italian tortellini and pasta Bolognese. We came there on an early evening and there was one last table vacant on their terrace. We immediately dug into the menus and looked for what to order, eventually ended up with those tortellini and pasta Bolognese. While we waited for our dinner, the queue to the trattoria was getting longer and longer. Once again, we felt lucky about coming there exactly on time and skipping the queue. The food we ate there was yummy! Of course, we complemented pasta and tortellini with local white wine. Altogether, it was a perfect end to our Bolognian food journey.

That is basically all we did in Bologna, ate lots of delicious foods and walked around the city. We didn’t plan to spend these two days in Bologna for food tasting but that turned into a wonderful experience. Of course, we also visited the main sights in Bologna but I guess that’s enough for one post so stay tuned!

Oh, and if you’ve missed the previous Italy travel posts, check out the post about train-tripping in Italy and our visit to Florence.

Books I read this Autumn

Introducing… The Taste of Lithuania!